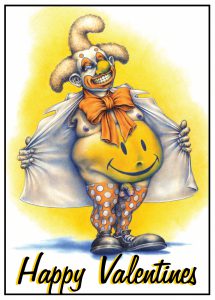 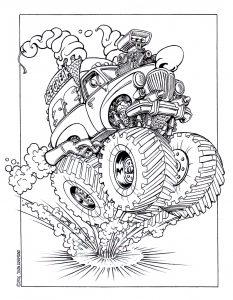 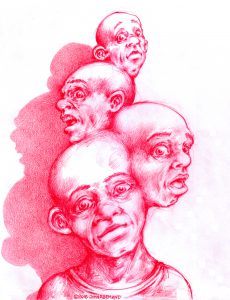 Mulberry Jelly sat on the edge of the stage covered in sticky egg juice and rotten vegetable pulp.  He couldn’t figure out what the crowd hated more, his cliché street-rapper name or the combination-spoken word/death metal version of “I’m a little tea pot” he was performing before the riot broke out.  One thing he knew for sure;  His brilliant career in show biz was over before it started…again.  The same thing happened last week when he tried a blues/ballet combo of “Freak” in front of the local Middle School Talent Show Fundraiser.  He refused to accept his Mom’s advice to study dentistry or go into his sticky Uncle Morty’s carpet cleaning business.  Who were they to call him a talentless hack?  No!  He would go on!  He would make Mulberry Jelly a household name and prove to the world… Aw hell!  Who was he kidding?  The only reason people showed up to these things was to gawk at him for the bizarre growth on his…..

***This artwork, which is only a red rough here, has been finished to a final render and is ready to be published in our “Body-Oddies” book…and it’s waaay cooler than what’s posted here, but you’ll probably never see it unless you get the book.  I really only post roughs and older work online (and only a small percentage of the pages of my books).  I save the best stuff for the books, so if you like the crap I let you see here, consider getting one of my books.  It IS how I make my living.  I have 3 books out so far and 2 more coming this year.  There are links above or you can find them on Etsy and Amazon (search EEW books)…’they make excellent gifts.’   -Marsha 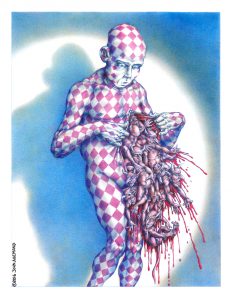 Mike stood on stage in the spotlight…..terrified. But, something about it seemed to be working for him.  They probably found his trembling voice charming as he spoke sincerely about his life…his completely bizarre, absolutely strange, totally unlikely life…and the cynical way it came across.  The crowd laughed at the tragic death of his wife in a mundane laundry incident.  They howled at how the wind blew her ashes into everybody’s mouth at the funeral.   And the five-day-old lasagna in a broken fridge, causing a vivid conversation with Lucifer, left them in stitches.  Every word he spoke, every glib anecdote, felt like a hole being ripped open in his soul, allowing his demons to spill out – only to be consumed and obliterated in the laughter of the audience…and when it was over…Mike stood open and bloody and spent and…..completely relieved.  It was better than therapy, better than liquor or sex or CHOCOLATE.  And he walked off stage to a standing ovation feeling light as a feather.

***This post is an illustration from our ‘Body-Oddies’ book project and is available as an original art print at the Conventions and Book Fests we attend.  The book is not scheduled for publication until 2019.  You can, however, find our 3 current books at www.sallemander.com or search ‘EEW Books’ at Etsy.com and Amazon.com.  The holidays are coming.  They make a great gift.  -Marsha 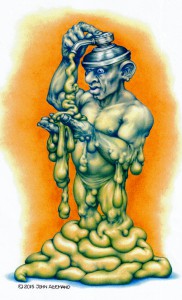 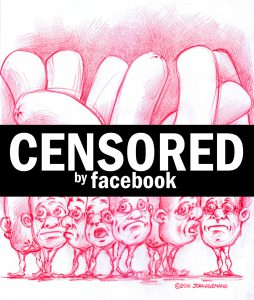 Willy arrived at the party with his friend Willy and his other friend Willy.  He was happy to be invited, he and his friends didn’t get many invites (they were kinda nerds) but it soon became apparent that this party would be another sausage fest.  The prospects looked pretty gloomy when he saw that everybody there was a ‘Willy’.  At least there was plenty of beer.  After a while he noticed the place getting really hot and humid.  There might as well have been flames licking up between the gratings in the floor…and all the Willies were getting some awkward, nasty looking tan lines – just like his – and they were drinking gallons of ice-cold beer to compensate for…

***Happy Labor Day!  If you are a wealthy capitalist, today is a day of triumph.  You’ve won the class war that most people still don’t seem to realize already happened.  If you are a working person, don’t despair, sure the unions are mostly dead and your job is a shit-show, but from here there’s nowhere to go but up…HOORAY!!!  This is one from our “Body-Oddies” project, a craptastic journey through the rancid mind of my artist, John Allemand.  find and buy our books at www.sallemander.com.    -Marsha 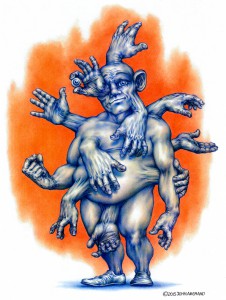 He did his best to soothe his anxiety, tried to make lemonade out of the lemons that seemed to be smothering him.  After all, how could yet another, extra hand possibly be all that bad for a skilled craftsman who worked with his hands?  Each one seemed to have all his talent and strength.  His productivity tripled, he was making money hand-over-fist (no pun intended) and for the first time in his life, people found him “kinda” interesting…..

But…waking up every few days with another fully formed hand growing out of some empty patch of his flesh was really starting to effect his insanity.

***This was a tough image to pull out of John’s thick head, but with an iron skillet and a power drill I finally managed it (long story).  It comes from our new book project, “Body-Oddies,” now scheduled for publication in 2019.   -Marsha 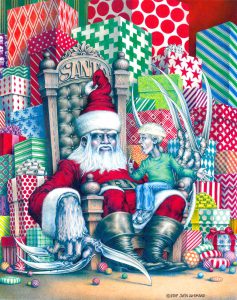 ***I found this in one of John the illustrator’s discard files while looking for images to attach to my wonderful flash-stories.  I absolutely love it.  It will be perfect for this week’s post – the last week before Christmas, there’s just something a little ‘off’ about this one, though…I just can’t put my finger on it…  Oh well,  Merry Christmas everybody!!!…go to our site and buy our books.   -Marsha 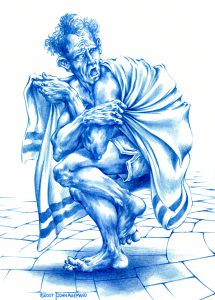 When Mike rented his new place he’d never even tried a hot tub before. It wasn’t the feature that attracted him to the building. It was the two extra bedrooms – that would allow his grown kids to visit on holidays and between college semesters – that he liked most. Six months went by before he even tried it out, but when he did….it was gooood! In fact it felt wonderful…so relaxing, it took all his cares away.

He came back to it again and again and started making time, once a week, to soak in its warm embracing waters, gently massaging jets and steamy, soothing solace. Soon he found himself hopping in every day – even twice a day. A quick soak before the morning commute or a nice long one after the stress of a long day’s work became an absolute necessity. He felt an affinity for it bordering on affection. He lost himself in the comfort and imagined himself in the warm embrace of the womb.

“Mmmmmmm!” he said…..wait…did he just say that? Strange, his voice seemed unusually low today, must be the bathroom acoustics …yeah! He relaxed again and submitted, to the moist tongues of ecstasy lapping his exhausted body….. “OOOOOOH, SCRUMMMPTIOUS!” he said in a deep, slow baritone.

Mike’s eyes bugged out as he leapt from the tub, twisting and convulsing like a housewife covered in spiders. Aghast, he screamed, “What the…I didn’t say that!?!” “OOOOH….DON’T GO MY LITTLE LOLLIPOP…..COME BAAACK.” said the booming voice from the tub. “Huh?” was all he could manage, shaking and dripping on the tiles, “AAAAAAAW,” boomed his tub, “MY SAUSSSSAGE DUMMMPLING, MY SPICY LITTLE MEATBALLL…..COME BACK TO MEEEEEE…I COULD JUST EEEEEAT YOU UP!!!”

***The image above is “AGHAST” recently published in our newest book “Bludgeon the Clown.”  Before that, it was loaned out as the cover to a book of flash-fiction entitled “Aghast” by Joe Del Priore (a VERY funny book and well worth reading).  But it was originally commissioned by Analog Magazine for their Jan/Feb 2007 issue.  This post was our 3rd post ever, from Oct., 2015.  Follow the www.sallemander.com links above to find all of my books.   -Marsha 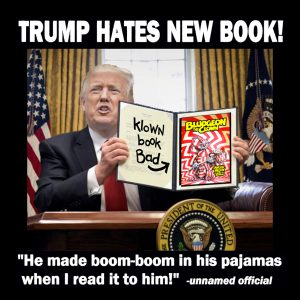 ***A friend of mine found this on Facebook and sent it over.  I remember mailing a bunch of advance copies of “Bludgeon” to a customer in Washington DC last month.  I had no idea it would reach the desk of the president.  John and I are thrilled: “boom-boom” in the president’s pajamas is exactly what we were going for with this book.  Meanwhile, John is trying to track down the photographer so we can confirm the news report.  -Marsha