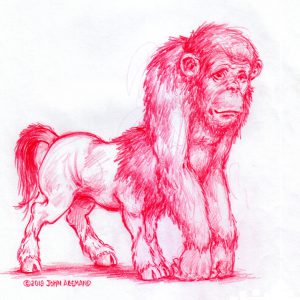 I was in no particular hurry at 7:15 on a Saturday morning.  I was driving north on Interstate 295 at about 70 mph. and there was hardly anyone on the roads.

I used the center lane.  It kept me out of the way of the odd car entering or exiting the highway on the right, and there was no reason to be in the passing lane on the left.  But even at that hour, the occasional knot of fancy, expensive cars came up like a swarm and flew past on either side as if I was standing still.  No problem.  It was no bother to me.  There was plenty of room for everyone to do their thing.  They could all crash and die, for all I cared, and I would simply steer around the mess and be on my way, unfazed.  I just never seemed to be in a hurry any more, and I couldn’t imagine that kind of stress ruling over me…or the lack of self control.

I saw the black Mercedes approaching in my rear-view from two miles back.  A minute later it was right behind me, center lane, barely a car length away.  There was no one else on the highway.  There was an empty lane on either side of us as I just explained…and there he stayed.  This tailgating assmonkey with a bloated sense of entitlement, decided to try to bully me out of his lane rather than use his signal and steer around.  He pulled right up to my bumper, flashing his high-beams and honking.  I could see him  shaking his fist and hollering something which looked like, “Let the fudge outta my brain!”  Weird.

Oooooh, the seething madness that consumed his face and filled his luxury cockpit with vitriolic bile, the angry expletives bellowed, the spittle sprayed at the indignity I caused him to suffer by obstructing him, in HIS lane, at a measly five miles over the speed limit…and to watch it increase as I smiled and calmly took my foot off the gas petal, slowing down to 65…was priceless.

The sheer hugeness in the way his rage increased at that moment made me laugh out loud.  By the time I’d slowed to 58, he literally seemed to expand, turn beat-red and blow white steam out of his ears, and just as I reached the minimum, at 40, he popped.

I saw his windows suddenly pasted with gooey chunks of reddish bits,  teeth and slabs of fatty flesh (though, no brains).  His car veered off, crossing the left lane and slammed into the concrete barrier dividing the north and southbound lanes, exploding in spectacular fiery carnage.  Mangled pieces littered the grassy median and black smoke rose 400 feet into the sky…..which NOBODY actually saw.  None of it inconvenienced anyone.  No lanes were closed, no traffic jam formed, nobody was the least bit bothered…because there was nobody else on the friggin’ road!  And no reason for that assmonkey to have tailgated me.

With a carefree smile, I slowly brought my speed back up to 70 and turned the volume up to eleven as “Dead and Lovely” by Tom Waits played on the radio.

*** Where I come from, Assmonkey is the name we use for tailgaters, people with no self control who drive their cars close enough to your rear bumper to smell your last meal.  This red-rough sketch and short story draft are new for our 5th book, “Body-Oddies,” which we’re finishing up for publication early next year.  They will surely be revised and finished beyond recognition, so you should try to enjoy them while you can.  As it is, only a fraction (barely 13 percent) of the material from any of our books is ever released on social media, so you really should try to get the books.  Find all our stuff at our Etsy shop (search EEWbooks), or follow the links to www.sallemander.com, which will take you to our Etsy shop.   -Marsha