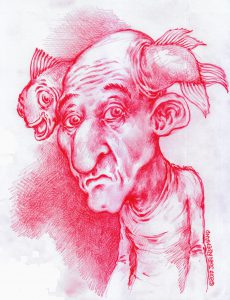 I woke up unconscious.  My aching head smelled funny.  There was something sticky between my cheek and the cold shelf in the refrigerator.  “Eat me!” demanded the chicken, “I taste great! Why…I taste like chicken!  Everybody loves chicken.”  He was hard to take seriously without a head – his neck hole made him lisp.  “Eat ME!!” he yelled again.

But the egg was just as bold: “NO!  Eat me!” and raising his eyebrows suggestively, with a sexy-baby voice, he said, “I’m young.  I’m soft.  You can do ANYTHING to meeee…fry me, poach me, slather me in mayonnaise… Mmmmmm!  I’m delicious!”  He grinned.

“Don’t listen to HIM!” said Chicken.  “I’m delicious with mayo too…and you LOVE barbeque and I have…”

I slammed the fridge.  I could see that the jelly was already awake and I always hated talking to her.  Besides, the guacamole was poised, just waiting for his chance to interrupt and frankly, my aching brain could not handle whatever the leftover stromboli had to say – with his nauseating salami and jalapeño breath…..and what was that funny smell?  Was that fish?  I don’t like fish.  “Hey buddy,” said the fish, “that’s not a very nice thing to think.” 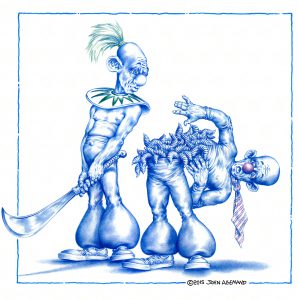 ***It’s just that kind of week…John’s brother’s wife died on Saturday, his other brother is coming up from Florida to stay for the funeral on Thursday.  His two youngest sons graduate high school on Friday, his mother is coming in from Utah to stay for that – as well as his middle son’s birthday and his oldest son’s college graduation… AND one of his cars was in a fender-bender this morning while he was getting his youngest son back to school after a face breaking concussion and recovery.  Glad I’m not him.  On the bright side, all I have to do is continue working on our new book – which is nothing but hours and hours and hours of fun… -Marsha 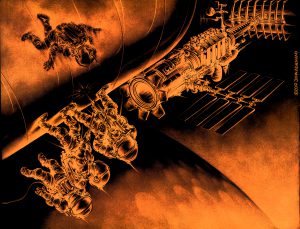 “Well, that was pretty weird…” Quinn’s dad said, as they strolled out of the hospital emergency room toward the car.  Quinn nodded in solemn agreement.  His brain rattled a little, still full of purple marbles and tapioca.  He winced as his now full blown concussion sent steam whistling from his ears and left a trail of silly string on the asphalt.

Just a few hours earlier, Quinn, the goalkeeper for his club soccer team, came out of his box low and fast, to intercept a couple of players desperately sparring for the ball.  He dove in, punching it away as one of the players aimed a kick…but instead of connecting with the ball, his foot caught Quinn in the face like a grizzly car crash (an all-too-common goalie accident).

Quinn’s jaw spun away with a funny “vip-vip-vip!” and hit a light post, exploding in a shower  of sparks.  His teeth peppered everyone within fifty yards…but his head flew straight up in the air at such velocity that we lost sight of it shortly before his “AAAAAAAAAAAH!” diminished into the night.  What a mess!

Willy the Astronaut was a clumsy buffoon who, for the second time this month, slipped and splashed into the molding tank at the polar ice mine on the surface of Mars…as it’s contents began to freeze.  His heavily insulated vac-suit protected him from harm, but he wasn’t discovered until the 60 ton cylinder of ice had already been rocket-lifted up to the orbital processing plant, where it would be transformed into liquid oxygen rocket fuel.

Willy’s coworkers labored fruitlessly for eight frustrating hours with a laser drill to free him, without luck…..until Willy noticed Quinn’s gnarly, high velocity head glance off the ice and careen away, still hollering, “Aaaaaaaaaah!”  Quinn’s head must have hit a sweet spot in the ice, just so, because it fractured the cylinder neatly, allowing Willy to escape unharmed and without a costly, shattered mess for the mining company.  Willy never mentioned Quinn’s head to his employers, he was a known buffoon and his credibility was already compromised.

As to Quinn; his dad managed to gather up all his bits and parts and take him to the hospital, where the clever use of duct tape and super glue had him back on his feet in a few short hours.  We figure his wild story about ice mining on Mars was probably just a symptom of his concussion.

***This is a totally true story which happened to John’s son, Quinn, last week, at a soccer game in Millburn, NJ on June 9th, 2017.  Quinn is recovering (slowly but steadily) and has been corresponding with Willy the Astronaut on facebook.  Quinn’s dad is building a rocket ship in the barn out back, so they can visit the ice mine on Mars next month.  -Marsha 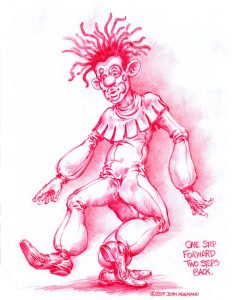 Milton was an odd fellow. Everybody thought so. He had wild ideas about everything from politics to gardening. He thought animals would be healthier if we didn’t butcher them. He thought terrorism was a bad way to fight terrorism and had, daily, heated arguments about transference with the wooden Indian outside the smoke shop….very odd.

He painted a creepy clown face with purple polka-dots on his van (even though he can’t drive). He muttered bizarre things to ladies as he passed them in the streets, like: “Have a nice day!” and “Love your head scarf!!” – it was horrifying. Last week he predicted the world would end two years ago and hung unauthorized presidential campaign posters for ‘asparagus’ and ‘enchiladas’ (even though they were probably better candidates)…and every time he ate pickled anchovy sandwiches with mayo and peanut butter, his breath still smelled like beef jerky…..Huh!

For all this and much more, Milton was the subject of intense gossip all over town. He often made the front page of the local Gazette and people got into fist fights over the consistency of his guacamole. To some, he was a nuisance, to others a local folk hero – and to others still, a tourist attraction.

Well, that was all good and fine for most folks…but for me, seeing him stroll about with three fully grown legs – one facing front and two facing back, was truly a marvel…..and wow, what a snazzy dancer!

***This is a sketch and flash piece for my “Body-Oddies” book project, which is well underway and on schedule for publication in 2018 (that is, if John can get his lazy ass in gear and finish the illustrations).  The publisher is really excited with the whole project.  -Marsha Mellow