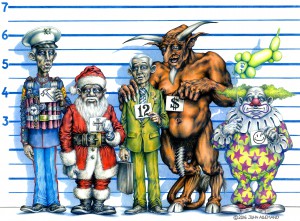 ***This post was originally published back in June last year…but I did a reuse because John read this poem, along with two others, at the art opening on Saturday (I was too nervous to do it).  The show, ‘Art & Poetry HA HA!’ at The Rectangle Gallery was fantastic and very funny.  It was a poetry reading followed by a reception for the visual art show – the kind of show that could change the mind of any poetry hater.  All the art was great and we got to meet a few of the other artists.  We really should do more of them.  There are pictures posted up at www.therectanglestudio.com.   -Marsha 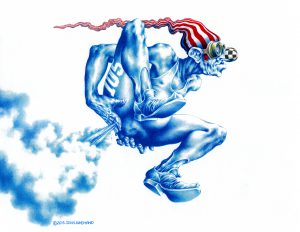 ***I may have posted this one last year but here is again…see, the darndest thing happened recently when the owners of The Rectangle Studio & Gallery invited us to be part of their inaugural ‘Art and Poetry HAHA!’ show.  I figured they must be crazy people if they liked John’s horrible clown illustrations…but John will be reading a piece or two of My work too, so they obviously have good taste.  The show is on Saturday, Feb. 25th at The Rectangle Studio & Gallery, 540A Freeman St., Orange, NJ 07050.  Open mike is at 6:30p (RSVP only) and open house is from 7:30p to 10p with froo-froo wine and snacks.  Find it online at http://www.therectanglestudio.com/.  -Marsha 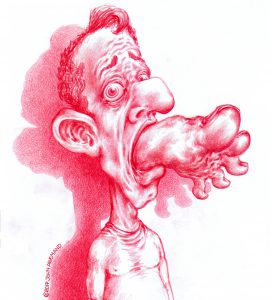 I woke up this morning feeling disheveled. I must have tossed and turned all night and tied myself into a knot, because when I woke up I fell out of bed…tied in a knot.  I didn’t know I could do that…and survive.  Worse than that, when I finally got myself untangled, I realized I had a foot where my hand used to be, my tongue was attached to an elbow and my hair had migrated down my back to my buttocks.  One of my hands had switched places with my wiener and one was dangling from an armpit but for the life of me, I could not find my other foot.  I wasn’t in any pain but the sight of it all made me want to scream…..except, when I opened my mouth…well, that’s when I discovered where my other foot had gone…

***This exact thing never actually happened to ME…but something resembling the ‘foot in mouth’ part definitely happened to the last loser who tried to pick me up in a bar, which…come to think of it, happened a few years ago on this same minor holiday celebrating the Marquis de Sade or something…..Valentine’s, whatever!  We’re too busy finishing our new book (‘Bludgeon the Clown’) to worry about it right now.  -Marsha 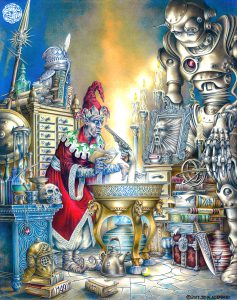 Piscataway, NJ. Zebulon the Wizard (formerly Joey the Clown) was about as common as clowns come…but with a knack for burgling.  He was the best: clever, adaptable, insightful – qualities still highly regarded by the clown community.  Once a petty thief, Joey changed his stars by stealing a magical Christian spell book from a secret Vatican warehouse. With the recipes in his new book, he was able to build a ‘time cauldron’ through which he could reach forward – or back – in time and steal more stuff…..better stuff.

Zebulon let me use his cauldron a few times to document some of the great  historic clowns from the deep, dark, misty past.  Its how we know so much about Saint George the Clown (from 299 A.D.) and Barge the Giant (circa 1330).  Zeb got me a Tubakazoo for Christmas last year, its a popular folk instrument from the year 2232.  It makes a (terrible) whining wheeze like the sound of a horse being strangled…while gently farting (I got him that red wizard costume).

***”Zebulon” is a page that just got cut from the latest draft of my new book ‘Bludgeon the Clown.’  I’ve trimmed it down from 186 pages to 100, so I can keep production costs low enough to sell it to real people.  I hope to have it published and ready to bring to Comic Cons in the spring.  John and I thought it would be harder to cut our own beloved writing and art out…..turns out there was a lot of crap and fluff and redundancy in the older drafts.  The new book is better now and Zebulon will work better in a different project.  The image was originally a commission for a 2 page spread for an issue of Analog Magazine.  -Marsha