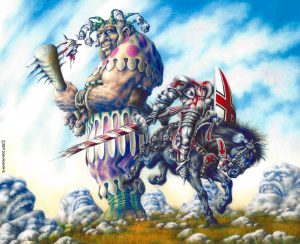 “Tipping points are what clowns really look forward to.” said Zig-Zag the Clown, who was thrilled to offer his comments on a painting featuring his old friend, Thorgrind the Giant, beheading a sleazy medieval aristocrat;  “In history’s rich pageant, tipping points are the main event…the height of entertainment…and the tipping point in our broken culture is inevitable.”  He went on to say that; “Class war brings inequality and instability, which leads to revolution and transformation.  It can take decades, even centuries for the oppressed to fester and pop, but they eventually rise up; they always have and they always will.  The best we can hope for is that it happens with as little violence as possible.”  I can agree with that.

Note: Since the Dark Ages, clown culture has consistently identified the giant as the embodiment of the population as a whole (the disenfranchised proletariat), while the knight represents the aristocracy.  We found epic clown ditties documenting the tipping points of long-lost civilizations stretching back for eons.

***Another all-new, never before posted image from our latest book, “Bludgeon the Clown”.  Why do I bother? …because I know that if you buy this book, it will poke you in the eye, kick your ass and completely diddle your whimsy.  Buy it at www.sallemander.com or search EEWbooks at etsy .com.   -Marsha

Toby had a belly button…a freakish big red one right in the center, and he was threatening to use it, too.  He showed up at the White House during a political fundraiser demanding an audience and got laughed out of the place.  The cable news outlets picked up on the incident and made a giant “News Alert” stink, convincing the entire dull eyed, drooling American television audience that he was legit – and that he’d press the button and unleash the demons of nuclear hell (or whatever) if they didn’t do what he said.

Well, that was it.  The world ended as we knew it (and it really backfired on the media who figured he was their puppet).  Toby brought an end to all wars and banned usury (which pretty much ruined capitalism).  He stopped fossil fuel use and forced everybody to respect the environment…and that was just for starters.  Every time he rested his pudgy finger on that big red button, the world went into a panic.  He managed to bully everybody on Earth into being….. better…OR ELSE!!!

Huh!…I wish I had thought of that.

***Is Toby a terrorist?  Sure!  Why not?  Is he a “bad guy”?  Well, not within two paragraphs…but power goes hand in hand with corruption and tyranny, so he’ll get there eventually…always will.  This is a piece from our 5th book, “Body-Oddies” which will not be published until 2020.  On the upside, you can buy our first 3 books at www.sallemander.com or by searching EEWbooks at etsy.com.   -Marsha

***Another all new image and poem from our spectacular book, “Bludgeon the Clown”.  More than just literary wit and extraordinary illustrations, Bludgeon explores the fascinating and very REAL world of the clown race and their impact on our fetid American culture.  Find it and all our books at www.sallemander.com or search EEWbooks at etsy.com.   -Marsha 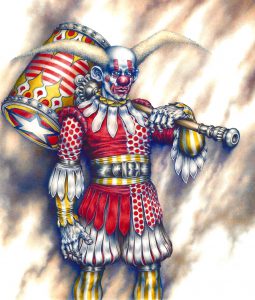 Let us never forget Sir Bludgeon the First, a clown who rose to greatness during the fourth crusade in 1203, while employed as a belly-button groomer and a peek-a-boo latrineer by Lord Periwinkle the Incontinent of Swabia.

In the darkest days of the campaign, before the massacre of Adrianople, when the crusaders were under siege and facing starvation…and having eaten all their horses, servants and unnecessary limbs, they turned to their Muslim prisoners for food.  During a heated argument between our intrepid Bludgeon and the venerable Doge Dandolo, of Venice, over a young Muslim child (on whether to pummel him into hamburger or simply roast him whole over a spit), the intellectually frustrated Bludgeon flung the child away.  Luckily, he landed safely in a vat of boiling oil and fried to an enticing crisp.  The odor and taste of deep fried meat was so popular with the crusaders that Bludgeon was knighted on the spot and dubbed “The Duke of Deep Fry.”  Today, deep fried food is the staple diet of America’s growing (rotund) population…whose quality of health is almost as good now as it was in the Dark Ages.

***Yes, this is an image and excerpt from our third book, “Bludgeon the Clown”, that we haven’t posted before (though John did use the head-shot of Bludgeon the 1st for his FB profile pic. for a while).  Bludgeon is an impeccably written and illustrated marvel of whimsy and wit.  You can buy it at www.sallemander.com or by searching EEWbooks on etsy.com.  You need this book.  It will change your life.   -Marsha