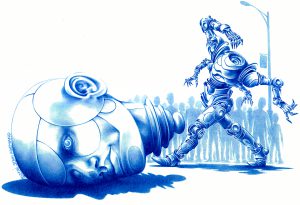 Cornelius lost his head…just went completely off.  One moment he was calm, cool and collected, the next – frantic and frustrated.  He had no idea where he left the darned thing.  It was gone without a clue.  Sometimes he left it somewhere he wanted to remember to return to later (which was smart, right?) but couldn’t remember where it was later without his head.  Some times it just rolled off and bounced away on its own.  Somebody said he should get it fixed… but it wasn’t broken.  That’s just the way he was.  Besides, what would all the others say if HIS head was permanent…but what does everybody else do when they lose theirs?  Oh phoooey!!  Permanent heads…..that’s just crazy, it just isn’t done!

***This image was originally published in Analog Magazine, Sept., 2006.  My short, flash-fiction fragment is good for keeping my twitter friends comfortable.  Long posts make them skiddish.  You can find my first 3 books by following the link, above, to www.sallemander.com.  -Marsha 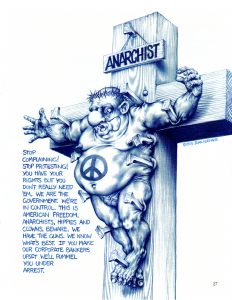 ***This week’s image is a page from our first book, “Marsha Mellow’s Blue-ish Freaks”.  Buy it.  find it by following the link above to www.sallemander.com.   -Marsha 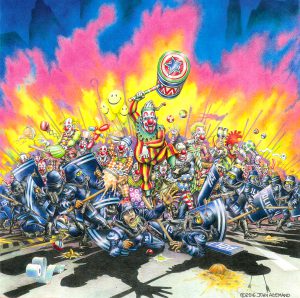 I wrote this piece (and John illustrated it) almost two decades ago.  I thought, for sure, things MUST change for the better by now.  Anyway, it finally got published in our new book, “Bludgeon the Clown”…which you can find (and buy) following the www.sallemander.com link at the top.  -Marsha 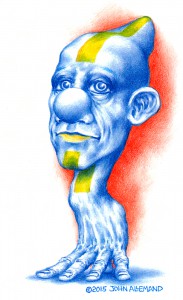 ***This image is featured in our new book, “Bludgeon the Clown” which is available now, just follow the link above to www.sallemander.com.  -Marsha