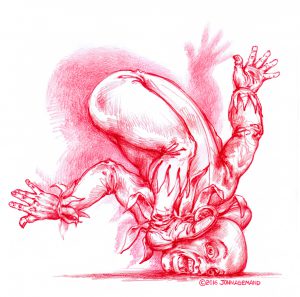 Henry Higgenbottom had an amazing talent. Welllll, maybe not so amazing as, lets say, ‘quirky’.  You see, Henry could “headstand”.  Yeah,  not so amazing…but since nobody else could ever do it quite like him, it kinda became his ‘thing’.  And despite all practical advice. he ‘did’ the crap out of his ‘thing’.  He became a minor local celebrity (oddity), got his fifteen minutes of fame on the T.V. news and bartered that into a stint on the state carnival circuit which propelled him into a pretty good gig with a circus sideshow troupe as a ‘Tumbling Contortionist’.  All things considered, however, his convulsive hiccuping act usually stole the spotlight (and all the laughs) and made his ‘headstand’ gimmick look pretty dull.  But Henry never gave up on it.  It was his own unique gift to the world, a sacred piece of his very soul and he made sure it was part of every show he did…..until one day he accidentally mixed his hiccups with his ‘headstand’ and SO disrupted his specially balanced stance that he snapped his own ridiculous neck.

Meanwhile, finish your holiday shopping with a trip to our Etsy shop (just go there and search EEWbooks)…OR you can follow the links to our website – which will bring you straight to our Etsy shop any way.    -Marsha

One thought on “Complicit in his Own Death”