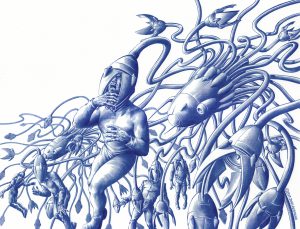 We think they consumed intelligence the way we consume food.  It sustained them and they were drawn to it like moths to a flame.  We think the people who came for the speech must have attracted them, after all, the event drew some of the top thinkers from the party; business executives, media luminaries, religious icons…all gathered together like a brain salad buffet.  We think their mistake was just a matter of bad timing, because by the time the singularity formed just above the President’s head and they began flooding through the rift like a swarm of gangly metal spiders, the bloviating buffoon at the podium had already been speechifying for over an hour.  A whole hour of engorged bravado, exaggerated assertions and pandering half-truths…reducing the (otherwise intelligent) audience to a drooling mob of seething stupidity.

We saw them spread out through the arena, randomly plucking dull witted followers from the audience like daisies, harvesting their heads for the tasty data in their brains….only to come up short.  The more heads they dissolved, the more puzzled they became…unsatisfied.  In fact they appeared to be weakening…starving – but then, who comes to a political speech, nowadays, for intelligence?

And as the rift sputtered and closed and the invaders lay down to die, we think we heard them mindlessly chanting …U.S.A….U..S..A…..u…s…a….. 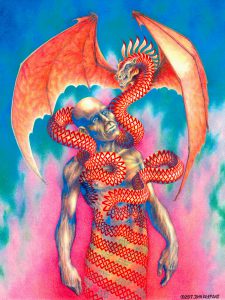 Dragon Man Dan was the tattooed freak of the ‘Bitsy Bopsy Travelling Circus Side Show.’  His one and only tattoo snaked around over 90% of his body.  His fellow freaks swore that it came alive and flew off into the night at the moment of his death.  They also swore that they never touched Dan’s illegal stash of colorful pills, which he was known to chew like candy…constantly.

***Another page cut from my new “Bludgeon the Clown” book by the editors at EEW Books.  At least the poem made it into my “Blue-ish Freaks” book.  -Marsha 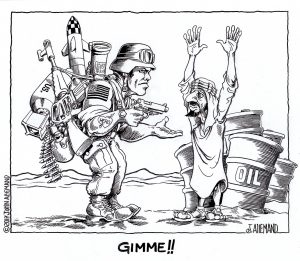 ***The editors at EEW Books got hold of a leaked CIA study, thoroughly analyzing the history of the Middle East since before WW1.  It was thinner than you’d expect (thick as a porter house steak), printed on bright yellow (saffron) paper in a succulent Helvetica Bold font, and absolutely stuffed (like tur-duck-en) full of big, juicy, important words…but it’s conclusion rendered down to one simple, tasty theme… which John has illustrated into a single cartoon image.  Bon appetit!  I’m off to lunch…I’m famished.  -Marsha 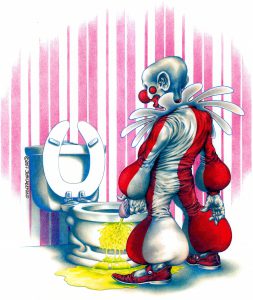 ***We’re breaking all the rules this week by posting a political one.  Yeah!  This one’s political, specially picked for the 4th of July.  What…you don’t get it?  That’s okay, its a tricky one.  Leave me an angry comment if you get it – and try not to blow your friggin’ hand off playing with fireworks.  -Marsha