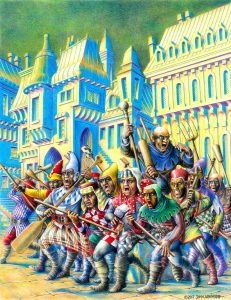 Its Not The Size Of Your Clown…

Peevish, North Dakota.  It seems that the smaller the clown, the angrier, more irritable they are.  This image was made during the last of three riots that day.  There was no media coverage and no arrests.  In fact, nobody in town even realized they had an infestation of teeny-tiny clowns…or what they were so upset about.

While clowns come in all shapes and sizes, the tiny ones are the trickiest.  They come smaller than you’d think possible and they get into everything.  They wrote an amusing folk tail or two about one no bigger than a thumb…but the teeniest ones are often mistaken for a viral outbreak (clever).  When I agreed to have a wild party with that kooky bunch, I didn’t realize I’d be hosting it in my belly for three solid days (not solid…ugh!!!).

***Another page that did not make the final cut of our new book, “Bludgeon the Clown.”  The illustration, by John Allemand, was originally commissioned for the June 2003 cover of Analog Magazine.  -Marsha 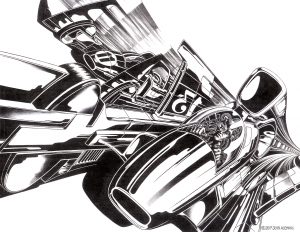 ***Marsha is away, arguing with the publisher again, probably in a belligerent blind rage.  It’s okay though, she does her best work when she’s  angry…or drunk (or both).  As you can imagine, I’m used to it by now.  But while we’ve been busy finishing our new book, she had no time to do a clever story for this illustration.  It’s an old one, the 3rd assignment I ever did for Analog Magazine (out of nearly 100); a 2 page spread for the May, 2003 issue…..I still like it.  -John ***We’re busy…really busy.  Here is an image from our “Blue-ish Freaks” book, to pass the time.  The poem didn’t make it into that book, nor will it be in the new one…..Oh well.  -Marsha 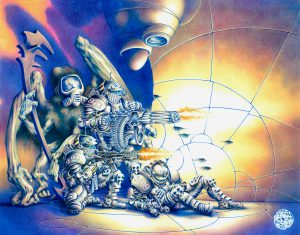 *****This is the 83rd post…and every 83rd post, Marsha takes a break and lets ME post one.  Hooray!  Marsha is away, arguing with the editor and publisher at EEW Books, trying to keep all her crappy mistakes IN the manuscript of our new book, “Bludgeon the Clown,” now that they’ve been edited out (and fixed).  It’s vanity and hubris to think her departure from proper English is her ‘artistic prerogative.’  She’ll argue and get concessions – and compliments – and come away satisfied…while the publishers will do whatever they want after she leaves, anyway.  It’s a messy, but necessary process….and it works.  Meanwhile, I’ve posted an illustration I did for the September ’06 issue of Analog Magazine, for a story by Edward M. Lerner.  It was a fun one to do…one of my favorites (though I’m no fan of war).  -John