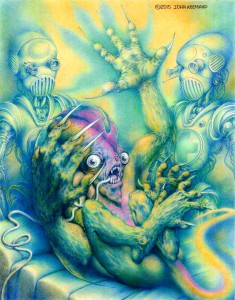 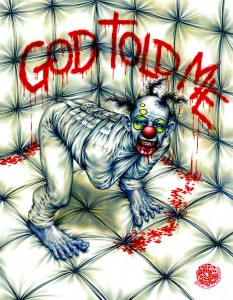 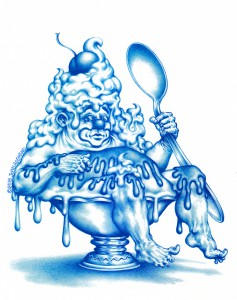 “Ohhh…its not so bad.” his wife told him with thinly veiled sarcasm.  “You look absolutely delicious…..!” she smiled sardonically.  But it was a hot summer day and he was melting on the spot.  He wouldn’t last much longer.

Billy was so intent on pleasing his estranged wife (poor henpecked bastard) that he took her desire for an ice cream sundae too far and transmogrified himself into one, without considering the consequences.  And still, as he slowly disintegrated into a sweet soupy mess, she would not favor him with her attentions – except to say, “Ugh!  You know I don’t like pistachio…..!”

***The image is another piece from our new book, “Marsha Mellow’s Blue-ish Freaks”.  You can find it here at www.sallemander.com (or follow the link above).  The story…is based on actual events.   -Marsha 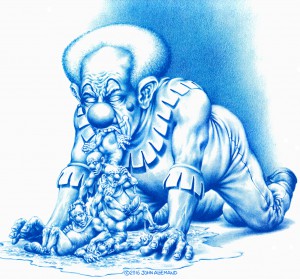 ***He must have eaten something funny.  This is from our new book, “Marsha Mellow’s Blue-ish Freaks.”  Buy the book.  It will transform your life.  Visit our website (find the link at the top of the page);  www.sallemander.com   -Marsha 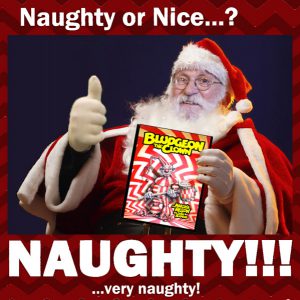 ***Of course, we’ve been friends with Santa Clause since we were kids and got a great interview with him for our “Bludgeon the Clown” book (although the publisher cut it in the final edit).  Still, we were surprised when he showed up on Thanksgiving for a free meal (and this guy can really stack and pack it).  But he REALLY stunned us with a  whopping order of all 3 of our new books.  He mentioned (mumbled) something like “…can’t use COAL in naughty peoples stockings any more ’cause it’s TOXIC…so…..ho, ho, ho!”  Well, fantastic!  He loves it!  You should get one too.   -Marsha