The Clowns rose up in anger one day deciding enough was enough.  They poured out into the streets en masse, yelling and juggling stuff.

They wanted ‘equal rights’, they said, to be ‘taken seriously’. An end to random giggles and leers. They wanted respect, you see.

Snarling traffic with mini Clown cars, squirtling flowers and ties,  their strike turned into a riot (of sorts) pelting police with pies.

They overwhelmed the barricades, storming the walls and ditches and made their way up to capital hill, leaving the cops in stitches.

But as they breached the chamber doors, their smiles turned into frowns, for the senate was already occupied by Idiots, Mimes and Clowns.

I wrote this piece (and John illustrated it) almost two decades ago.  I thought, for sure, things MUST have changed for the better by now…but no.  Anyway, it finally got published in our third book, “Bludgeon the Clown,” which you can find (and buy) following the www.sallemander.com to our Etsy shop (link at the top), or by going to www.etsy.com, search EEWbooks.  -Marsha 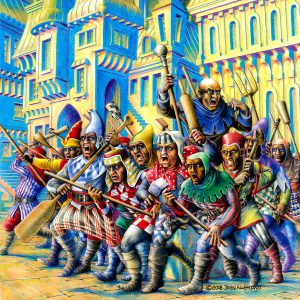 Arrived in the city okay, it was an easy flight.  I booked a little Bed & Breakfast right off the central square, in the old part of the city.  It’s as beautiful as the pictures.  I love the architecture…but I seem to have arrived in the aftermath of some kind of protest or riot or something.  There were broken windows, burning debris and overturned cars.  I also saw injured people being carried away.  But…it was all cleared up in no time and the old city returned to its colorful, medieval charm.  I love the costumes they dress up in for the tourists.  Excited to begin exploring this place.

There was a riot in the old city square again.  It was very scary…and exhilarating!  I had met some of the locals while shopping.  They seemed nice enough but looked suspiciously at me, as a foreigner, and were wound up waaaay too tight.  Events in the news had people on edge, but I managed to piece it together from gossip;

I seems they had a popular athlete who used his fame and fortune to protest the discrimination of his own minority (brown skinned) culture.  I noticed how they treated brown people in my brief interactions, so far, despite being the same species.  There had already been several ugly riots…not to end the injustice, but to keep the status quo, so people could enjoy their sports without feeling uncomfortable.  They smashed and looted brown skinned people’s businesses and burned the athlete’s swag and effigy in the old city square.  It sounded ridiculous…

This time people were upset because a prominent shoe company hired the same athlete to advertise their brand.  A little research showed that the company used child slave labor in their factories…but that didn’t bother people.  They just hated the brown people protesting.  The government and the wealthy used the media to whip everyone up into a frenzy…and they rioted.

People smashed and looted and gathered up all their shoes and burned them in the old city square.  This place is weird.

There was another riot today.  No sooner had things settled down and I was able to get out to enjoy the city again, when new rumblings of trouble began among the locals.  This time it was political.  It took me about an hour of research to get the measure of their incredibly broken economic and political system;

So…the city’s last big election featured two grossly incompetent candidates.  The numerous crimes and scandals of the winner were already rich fodder for regular riots…but this time (with the help of elitist propaganda), instead of demonizing the source of uncomfortable information (as usual), they stirred people up against the press, the messengers of all the embarrassing and dangerous news.  Once whipped into a proper froth, the rioters smashed and looted, rounding up journalists and writers, beating them bloody and burning all the books and newspapers in the old city square…they also burned down the city library.

It’s too bad, it was a gorgeous building and some of their literature was extraordinary.

I spent the last few days locked in my room.  The city wasn’t safe.  There was a minor riot yesterday, something about red haired people seemed to provoke a spontaneous fracas.  They’re happening more and more frequently.  This time ‘gingers’ were rounded up and beaten, they broke red stuff, looted red stores…oh, I don’t know!!!  I was too busy dying my hair black to get the details.  It doesn’t matter…there’s a new riot brewing now;

People just found out that their children are being raped and abused by priests…but they LOVE their religion.  I’m worried they might love it more than their children.  I have to get out of here before they start burning their children in the old city square.  This place is insane.  I was supposed to stay two more weeks but I really can’t take much more.  I’ve arranged for a flight out.  I leave tonight…wish me luck.

***This is a new short story I did, this week, for a new sci-fi/flash-fiction book I’m working on – with illustrations by John Allemand.  The working title is, “A Poke in the Eye.”  The image was originally a cover for the June, 2003 issue of Analog Magazine.  You can find our current books at www.sallemander.com (see the link above).   -Marsha