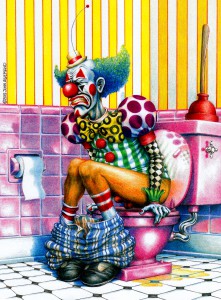 ***Fudge was the first ‘REAL’ Clown we ever interviewed (who we regard with some affection), as he exploded shortly after John sketched out this scene.  He turned out okay but destroyed a 14-store strip mall – along with 27 parked cars – and pasted us all in fudge…we laughed…..and laughed…    I’ve reposted this one, our 5th post,  from Nov., 2015, as it has finally been published in our new book “Bludgeon the Clown.”   -Marsha