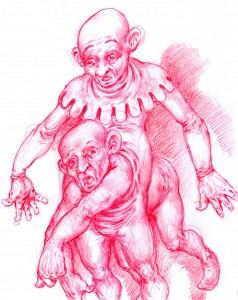 “Oh no!…Say it isn’t so!!!” Willy whined, staring down at his belly in horror.  “This is just getting weird…”  His therapist told him time and again to let his ‘inner child’ out but THIS was ridiculous!  What began as common heartburn blossomed into something completely bizarre.

Willy was the typical modern American man; A politically connected (racist), deeply religious (extremist), highly educated (affluent) corporate executive (dullard) – a completely normal, well adjusted person in a desperately broken society.  So naturally, he was quite fucked.  It was no wonder he developed chronic aches and pains…and over time they became rather terrible.

Willy’s doctors found nothing wrong with him, no infections, no disorders, no cancers.  They told him it was ‘all in his head’ (it was actually in his torso, an inch above his liver and just to the left of his pancreas) but his shrink found him just as fit as his peers.  Still, the pain got worse and worse until finally, at his absolute breaking point, Willy had…..a breakthrough.

He woke up one night from a juicy steak and alcohol-induced stupor to find a finger sticking out of his belly (and the complete absence of pain).  It was so weird he thought he must be dreaming and dropped off again but by morning a whole arm had emerged while a pair of feet proceeded to push out of his back with a gooshie spluck.  He was so freaked out, he fainted…..and when he got up again, he could do nothing but watch as a whole person emerged form his torso, front and back.

***We spent the better part of two days in the NJ motor vehicle gauntlet this week, getting licenses renewed and title, tags and registration done for a car.  John did this sketch while we waited which perfectly captured the experience in one shot.  -Marsha