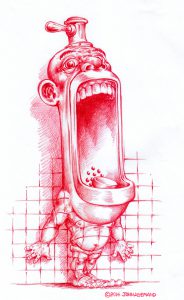 Something in the smell wafting from the bathroom told me that things were going badly.  The crap being shouted was definitely not appropriate for television.  Negotiations had broken down and a strike was well underway.  Worse, the strikers were in open revolt,  flinging their sacred deposits all over the walls and ceiling.  The trust between us was broken.  Innocents were soiled, and who knew if the scars would ever heal, but all that was secondary to the fact that…I  had to go.  I REALLY had to go — BAD!

Shamefully, and in typical corporate fashion, I snuck out to the back yard, found a tree and used it like the primitive monkey I was.  Disgusting.  Yes, I’d found a cheap scab replacement to the striking toilet — but I just couldn’t hold out any longer…ugh!  I felt dirty.

I say, give the strikers whatever they demand before this gets any worse and we have a REAL shit storm on our hands…our shoes… our trousers…..

***Another raw, rough-sketch teaser from our new book, “Body-Oddies”, which will be our 5th.  John is finishing the illustrations and arrangement/design while I finish the writing (for a May release).  After that, we’ll be off travelling around the country on tour, attending book fests, comic cons and sci-fi cons to peddle our wares like medieval hucksters, bringing literary joy to our impoverished country.  Find us on Etsy.com by searching EEWbooks when you get there.   -Marsha