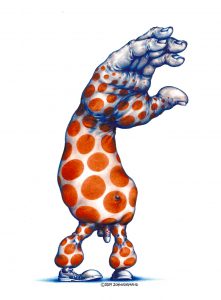 Clowns Are Nuts and leave them in gooey, nasty, sacks everywhere they go.  Clowns shed nuts faster than toenails, which survive infancy more often than those spawned in poop, booger, zit, earwax, sweat, spit and severing.  The hardiest of the species seem to come from the squashy, croquet-ball-sized nut, laid like an egg by an infected gazelle.  People who find them often feel compelled to decorate them like fancy easter eggs.  Some folks mistake them for gob-stoppers.

Clowns who leave their severed parts lying about often discover an unexpected bundle of joy.  They know they can re-grow missing bits but forget that their parts can also regenerate.  Sometimes they grow to be identical twins……or worse.

I’m reminded of a secret experiment conducted by the government, about a decade ago in Yonkers, in which clown parts were surgically transplanted onto human subjects (volunteer convicts) to test their possible military applications.

It all went bad from the outset.  Each of the dissected clowns expired as soon as his various nose, hands or wiener was removed but worse, all thirteen human (victims) recipients went immediately bonkers, breaking out of their holding pens in a fiendish dancing frenzy.  Most didn’t survive the week, gorging themselves on fast food,

***These are the elements that comprise page 39 of our brilliant book, “Bludgeon the Clown.”  Everything in it is absolutely true and exhaustively researched.  All our books can be found (to buy) at www.sallemander.com.   -Marsha