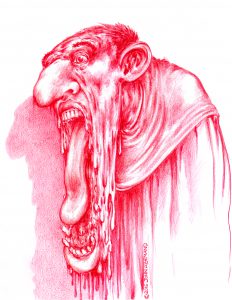 Father Rodriguez Domingo Emanuel Castillo stood on the dais before his congregation at Sunday mass, slack jawed and silent – as if in a trance. Everyone was (respectfully) baffled as he committed his minor, weekly spectacle.  Intense prayers hissed through humid air, a mumbled chanting, eyes lolling, bodies swaying, swooning and barfing in awe as his lips and cheeks slackened and the agonizing minutes passed.  A thick silence fell as  his melting jaw splashed into a dribbley puddle at their feet.  Nobody moved or said anything… everyone just stared, stupidly…because it must be a miracle… right?

***I love religion, such a rich source of popular entertainment, so irrational and blind.  Someday, humans may become civilized enough to remember it fondly…like wearing diapers and learning to eat with a fork…if we survive the religion of Capitalism.  Meanwhile, you can find our books at www.sallemander.com.  Next weekend we will be at Philcon, The Philadelphia Sci-fi convention.  Come find us under the EEW Books banner.    -Marsha