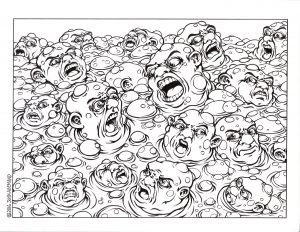 Herbert had been prone to rashes since he was a kid.  He caught them all – like a rash magnet…it was inexplicable.  He had at least three rashes on any given day of his life.  As a sickly nerd, he never had friends…..so how the heck did he get chicken pox?  He never had sex, so where did he get crabs?  Hell, he had rashes no one ever heard of.  He was a spotty, itchy, miserable pariah (though he was a delight to his dermatologist).

***Oh, how this reminds me of my teenage years…though my speckles were quite amiable and we were into the same music.  This image comes from our “Creepy Clowns Coloring Book.”  You can find all our books at www.sallemander.com   -Marsha