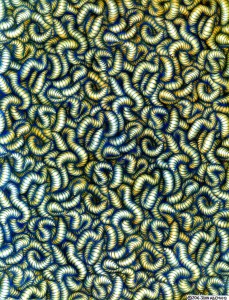 The worms had invested several generations in this project.  They were steadfast and intrepid.  It took months to meticulously scour every inch of the box to find flaws in the smooth laminate – the tiniest gaps in the seal – then year upon year of boring , rotting and tunneling through hard woods and glues.  They had never met Faith…had no idea what kind of person she was, but from the quality of her box, they trusted that she had taste…was tasteful.  (Tasty?)

The worms celebrated their first breakthrough as a holiday.  It was a momentous achievement.  A pauper’s box was easy to tap but was quickly overrun by poachers, a rich person’s box, though a major endeavor, was a rich prize.  The worms took time to reflect and remember their forebears who began this campaign with such hope and ambition.  It was good to be a worm and sure to get better…

***Some would qualify Faith, with all her enhancements, as a “cyborg” (how exciting!).  However, the products which enhanced her beauty also shortened her life.  Oh, but never mind that!  I’m sure she’s been looking up at her corpse this past decade, quite proud of its everlasting glamour.  As to the worms, I’m afraid there isn’t much hope.  Perseverance and integrity don’t count for much any more.  Meanwhile, today’s graveyards are tomorrow’s superfund sites.  This image is published in our new book, “Bludgeon the Clown” as the ‘Chapter 6: Death’ page illo.  It was originally our 21st post from Feb., 2016.  Good luck Christmas shopping…try not to poison your children.  -Marsha