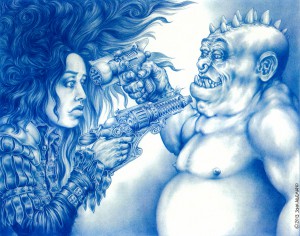 Don’t look at me like that!  I knew he was a Goblin all along.  He made no secret of it.  I thought he was kinda hot…in that greenish, warty way – with long, sharp tusks and the rancid smell of rotting puppies.  Turns out we have a lot in common – HAH!!…not what you’re thinking (my tusks are neither long nor sharp).  Really though, we found that we both have terrible luck in romance with our own species.  Why, just yesterday he confided to me that despite my incredible human ugliness, I was so much better than any ogress he’d ever had (so adorable)…and I had to admit the same.  Intellectually, we’re a perfect match.  He loves my awful Clown poetry and I love when he stomps about smashing things with a fat gnarly club – while we both hate smartass intellectuals and both have a kinky thing for exotic firearms…..aaaaaah, true love at last.

***This should, in no way, be construed as a true story (and you better keep your damned mouth shut Delia, you weren’t even there!).  The illustration was first used in 2013 by Surprising Stories DCWI.  -Marsha