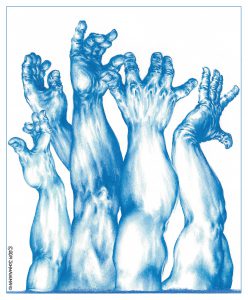 The disarmament was epic.  Everyone embraced the idea…until it was over.  Then there was no way to…embrace.  The last ones needed to be pretty clever to get it done, but by then, starvation and disease was already setting in.  People really hadn’t thought it through.  It was bad enough that they could no longer feed themselves or drive…or text, but reality finally dawned when they started to defecate in their trousers.  They certainly couldn’t embrace anything, or each other, without arms.  And all those millions of disembodied arms lying about, decomposing in piles everywhere, led to all sorts of nasty airborne and waterborne illness.  What a disaster!

When the aliens landed to study our dead culture a few years later, the sheer stupidity of it shocked them into insanity.  They evacuated immediately, nuked the Earth from space, and made sure to purge it’s existence from galactic memory, lest it infect others. And all who came into contact were euthanized for safety.

***This is a new story with a new image for our new book, “A Short Burst.”  I should have advance copies to sell soon, meanwhile, you can find my first 3 books at www.sallemander.com or search EEWbooks at etsy.com.   -Marsha