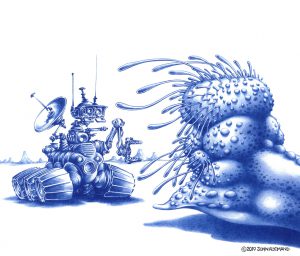 I had another little chat with Major Tom today.  I chose his name from an Earth radio signal I found in an old scouting report.  He likes it better than MR-17.  He seemed melancholy.  He complained that his brakes were wearing down again and the red dust was effecting the bearings in his wheel motor housings.  He was sad about having to salvage parts from the other rovers (his friends).  He was the last of his kind still in operation.  He denied feeling sad.  He still doesn’t accept that he is sentient.

Major Tom offered me some valuable data today.  At our last encounter, I told him what we were prospecting for.  He expanded his own search parameters to help.  His scanners aren’t as good but his mapping data will save me a lot of time…and it was a very kind thing to do.

He kept glancing up at the 3rd planet during our talk, as if he was nervous about being seen with me, in case his handlers were suspicious about his loyalties or something.  I often glanced up there too, wishing we were THERE instead of here.  We were currently mining the 4th planet.  Major Tom called it Mars, after their God of War.  I told him “It would have been a more appropriate name for the 3rd planet.”   He laughed.

My People weren’t supposed to be here, the air is bad and the minerals aren’t much better.  The 3rd planet was the prize.  It had living oceans, forests, diverse wildlife and over 7 billion incredibly tasty humans.  I tried human a couple of times…delicious, cooked or raw.

Our long-range scouts warned us of an impending global warming disaster on Earth.  Humans still had a problem with greed and religion.  They couldn’t see their own mess staring them in the face, so they were doomed anyway.  We rushed out here to harvest it before it was too late…..but found a scorched husk, completely irradiated.  Nuclear war.  We couldn’t even mine it.  So, we set up on Mars and made the best of it.  We couldn’t go home empty handed, but what a disappointment.

Major Tom’s historic files showed us that they had allowed a tiny, 1% of their population to control everything.  If they hadn’t festered in cognitive dissonance they might have united…they might even have beaten us!  They were intelligent enough and had good weapons…oh well, it happens.  Power concentrated in the hands of the wealthy is rarely so wise.  Major Tom didn’t like talking about it.

I think I can convince him to come with me when we’re done here.  He’s smart and well built.  He’s also a decent chap with morals and integrity… perhaps he was the best his civilization had to offer.  He still sends regular reports home to the 3rd planet as he explores…even though there’s nobody to… really though, I think he’s just fascinated with this planet.  I think I could convince him to be fascinated with other planets too.  He’s coming ’round.  He was just lonely…and a little insane.  end.

***This story and image will be published in our upcoming flash science fiction book, “A Short Burst” (our 4th book), which is tied up in editing right now.  You can find (and buy) our first 3 books and all our other stuff at www.sallemander.com or search EEWbooks on Etsy.com.   -Marsha